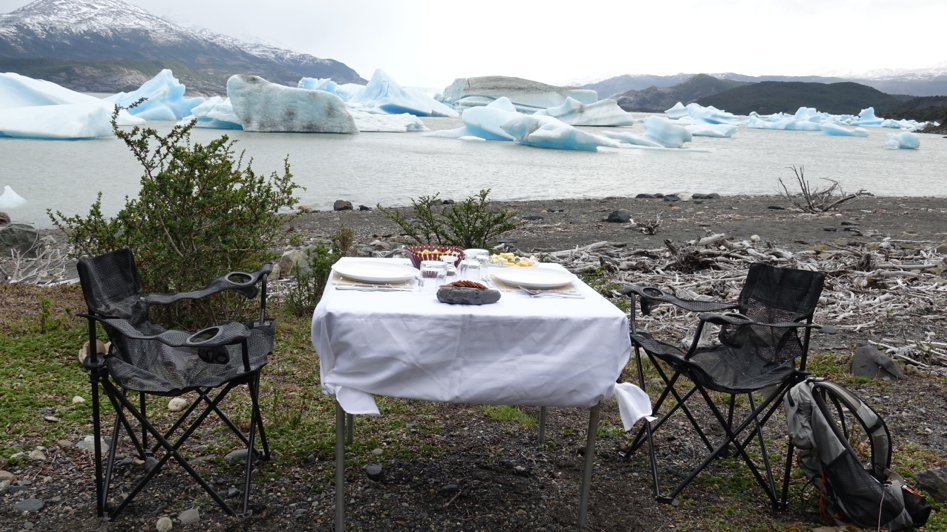 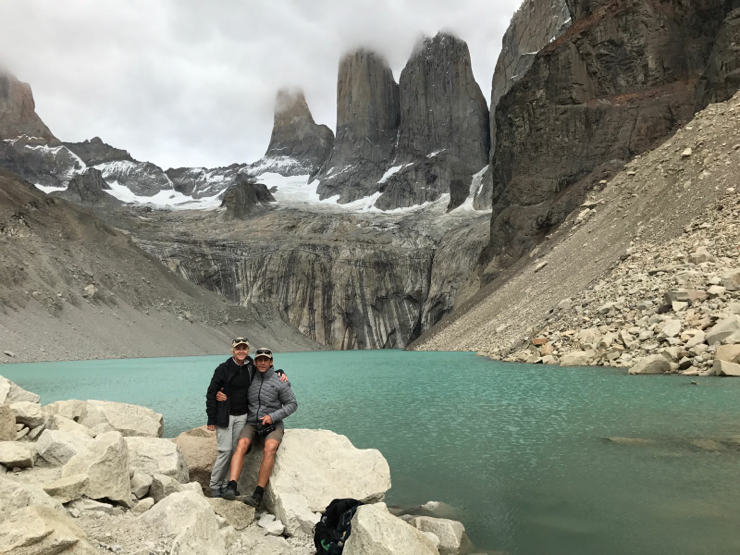 A word from Brad

It’s been a busy start to the year with lots happening across ‘Epic’s world’. Australia as always has been particularly busy over this time as has South America, in particular Patagonia. Bhutan has also been popular.

In the past couple of months I have personally guided some incredible trips.

On my recent trip in Africa I combined the Serengeti with Rwanda. Because of the geographical proximity of these two destinations this makes for a seamless trip. We spent a number of nights in the fabled Grumeti Reserves, a private concession in the western corridor of the Serengeti. We followed this with 3 nights in Rwanda including two gorilla treks. I have had the good fortune of trekking many, many times but each occasion is different. On this trip we were blessed with some incredible viewing and I hope the video that follows does this justice.

Last month I returned from guiding a trip through Patagonia and Antarctica. Absolutely spectacular! So much to report here that it I think it justifies a separate communique in due course.

Looking ahead, we have a great year in the offering:

– I am guiding a trek to Everest Base Camp in Nepal this week;

– then a safari to Namibia in May;

– followed by a visit to a fantastic new offering in Fiji. More to follow…

The safari season in Africa is then kicking in with the onset of the dry season. Simultaneously our tailored journeys into the north of Australia and Indonesia are in full swing.

I am very appreciative of your ongoing support as always.

Pedro privately guided a Texan couple on a 28 day journey of  Australia in October last year. Travelling the length and breadth of the country by private jet, they were blessed with mainly good weather, ranging from 45 degrees in The Kimberley to snow in Tasmania.

These Texan ranchers wanted to see ‘the best Australia has to offer’ but “the real highlights of the trip were the personalities Pedro was able to introduce us to.”

The journey started in beautiful Byron Bay on Australia’s east coast, then onto Lizard Island and the tropical rainforests of Far North Queensland.  Next was the Top End of Australia including Darwin and the beautiful Kimberley region of Western Australia (pictured above).  Not to be missed, was the ancient rock formations of Uluru  in the Australian Outback and the final leg of this Epic journey included pristine Kangaroo Island, Tasmania and lastly Sydney. 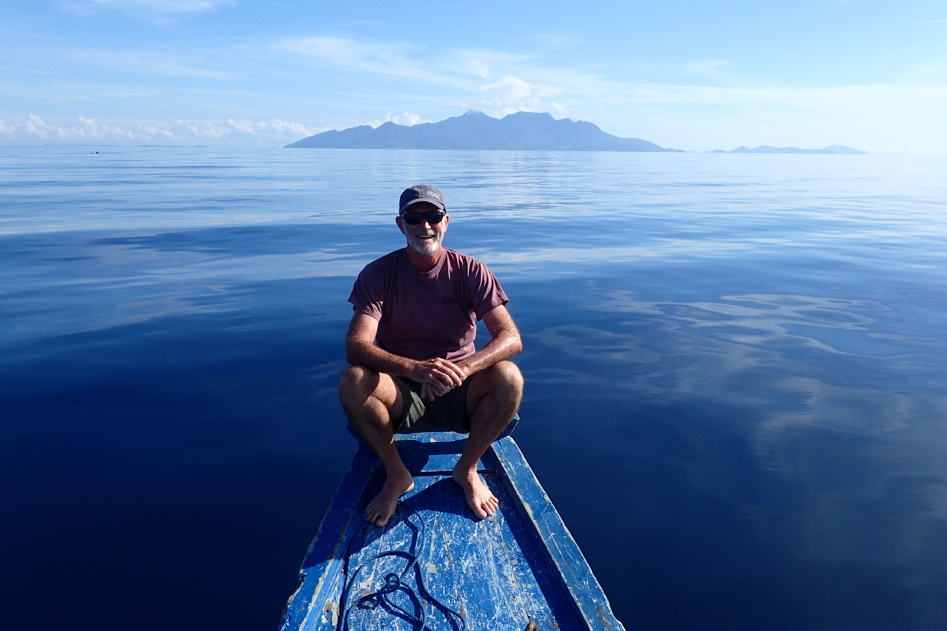 Indonesia, a very close neighbour to Australia, is made up of 17,000 islands brimming with unique cultures and magnificent scenery, yet most Australians only know about Bali.

I recently experienced this amazing destination, far away from the madding crowds and home  to some of the best snorkelling and scuba diving on the planet. This Epic journey included trekking to find Komodo dragons, hiking to the summit of Padar Island for panoramic views, watching the sunrise over multi-coloured volcanic lakes and strolling through century old rice paddies meeting local villagers. The image above is me cruising to Pulau Besar (island in background) to go diving in a cave created by a 1992 earthquake along the north coast of Flores. The diving is world class and home to the biggest Gorgonian fan corals and largest array of colourful soft corals I have seen.

A great way to experience this beautiful part of the world is sailing through the islands of Komodo onboard a luxury phinisi, a traditional Indonesian boat.  An ideal ‘trip of a lifetime’ for a multi-generational family celebration or a group of like-minded friends seeking an unforgettable getaway. And another bonus; the flight time is only 6 hours from Australia so no jet lag!

Stay tuned for more on this Epic Indonesia journey soon.

Pedro O’Connor was named a Conde Nast Traveler 2016 Top Travel Specialist for his expertise and private guiding experience in Australia. From the remote wilderness of Kakadu and the Kimberley in the north, to the pristine beauty of Tasmania and Kangaroo Island in the south, and also for Epic journeys to Indonesia and Papua New Guinea, contact Pedro to plan your journey of a lifetime. 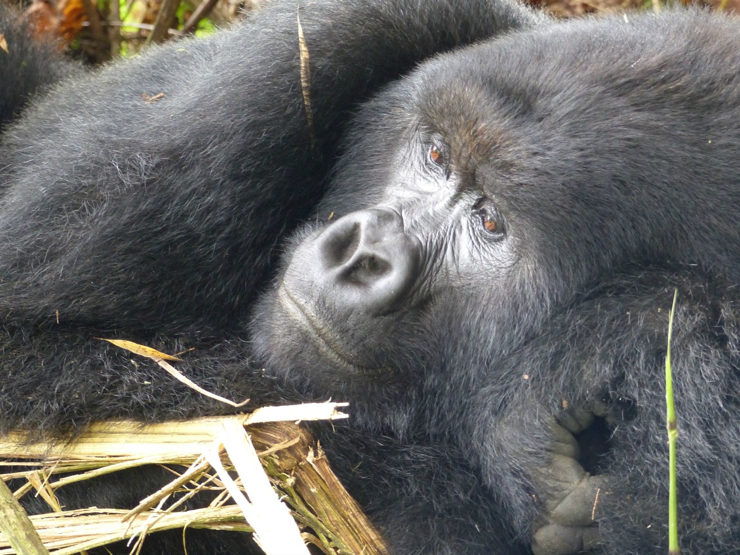 From Rob Barbour – Update from the field

Last year in August, I had the pleasure of traveling to Northern Tanzania and the Maasai Mara in Kenya with an American family on their first African safari. We visited Tarangire National Park, Ngorongoro Crater and the Northern Serengeti to experience the wildebeest migration as the vast herds crossed the Mara River to reach important seasonal grazing grounds.

Mountain Gorillas & Volcanoes in the Congo

In October I guided an exploratory trip with some intrepid fellow travellers into the Democratic Republic of Congo (DRC) to visit Mountain Gorillas, Eastern Lowland Gorillas  and to climb an active volcano (Mount Nyiragongo).  This type of trip would interest those who are widely travelled and enjoy seeing new, up and coming destinations. Read more on the Epic travel blog

I also hosted some Epic friends at arguably Africa’s best private conservancy – Singita Grumeti Reserves on the border of the Serengeti. Incredibly luxurious lodges and dining, coupled with superb wildlife viewing by foot, vehicle and balloon. Click here to watch the video

In November, Brad and I spent time in New York and Washington DC to catch with old friends and to meet new ones in order to develop future travel plans.

In January, I hosted another family from the US on a wonderful Northern Tanzanian safari.  One of the highlights was viewing hundreds of thousands of flamingos on the shallow soda lakes of the East African Rift Valley. Watch this amazing sight and others, in the video below.

Early this year, Epic hosted a journalist and photographer from New York based Departures Magazine, on a successful ascent of Mount Kilimanjaro.  The story is due to be published in the May/June issue of Departures magazine, so stay tuned. In the meantime, if interested read about Climbing Kilimanjaro on the Epic Travel Blog.

We are planning several Kilimanjaro climbs for both small family groups, larger corporate and charity fund raising groups,  visits to Uganda to trek mountain gorillas and a walking trek in Northern Kenya supported by camels in September.

2018 is actually not that far off and we are organizing a group who would like to trek in Ethiopia to experience the incredible terrain, ancient culture and amazing endemic wildlife.

We are also developing an exciting new active tour in Europe that will be released soon.
For more on any of the above, email Rob. 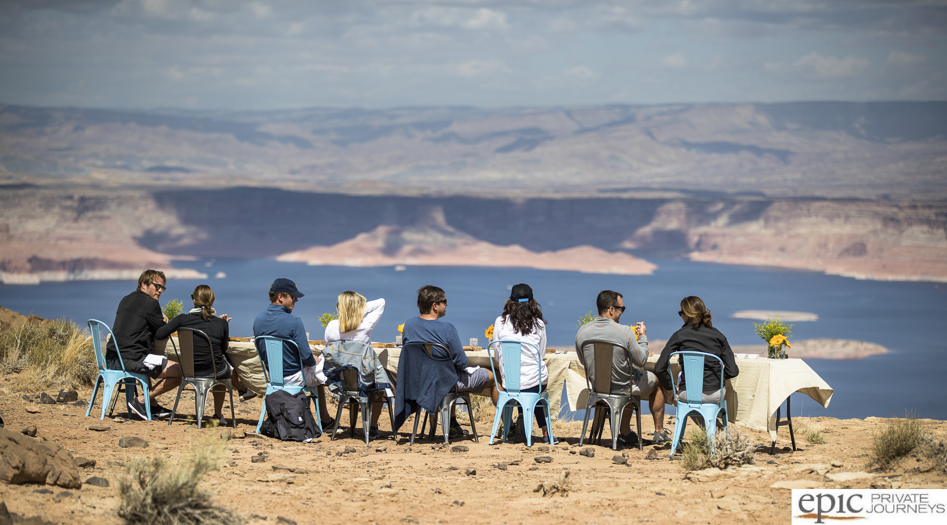 In September last year, we ran an unforgettable birthday celebration for a group of friends. Mackenzie Campbell describes this Epic experience.

…A client wanted to surprise his wife with an outrageous and quite thrilling 40th birthday party adventure. Everything was coordinated with the husband.  They took a private jet to Las Vegas with three other couples and enjoyed a day in Sin City with no idea what was in store for the next few days.

From Las Vegas they flew to Page, Arizona where they boarded a helicopter and flew over Antelope Canyon and Land of the Navajo Nation, eventually landing atop Tower Butte, a massive rock formation rising 5,000 feet above sea level. There they were welcomed with a juice bar, cocktails and appetizers, and were able to take in the stunning 360-degree panoramic views of Glen Canyon, Lake Powell, the Grand Staircase and Vermillion Cliffs.

After, the helicopter brought the guests to Lake Powell, landing atop their private houseboat where jet skis and paddleboards were at their disposal. The group settled into their rooms on the 4-story houseboat, docked on a private beach in Lake Powell. They enjoyed a fire pit and lawn games to play as the sun went down. Chef Shon prepared another delectable meal, and the clients ate smoked king crab cocktail, lobster tails, seared diver scallops and wild rice risotto and Prickly Pear cocktails. They even had a custom S’more* table and the chef helped them create specialty S’more combinations, adding Reese’s peanut butter cups or fresh strawberries to their cracker combination. 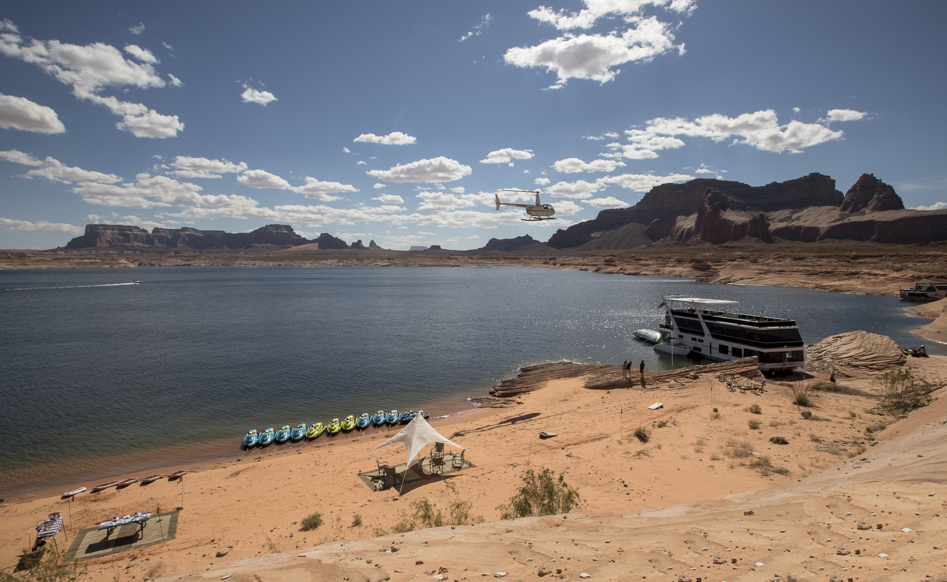 The following day the group hiked and rappelled in the slot canyons of Lake Powell, rode on jet skis, and went paddle boarding, making the most of their beautiful surroundings. They also got to take turns jumping off the houseboat onto a large inflated tarp, referred to as a “blob”. One person sits on the blob, and a second jumps off the houseboat onto the blob, launching the first person high into the air and into the lake.

For their final night in the Southwest, they boated and jet ski-ed across the lake and ended at Lone Rock Beach, where drivers/cars were waiting for them. They were transferred to Amangiri, a premier resort in southern Utah. Amangiri is a remote hideaway tucked within the luminous canyons of the American Southwest. Located in a protected valley with sweeping views, the resort offers both adrenaline-fueled adventure and a peaceful retreat.

To create your own Epic North America journey email us. 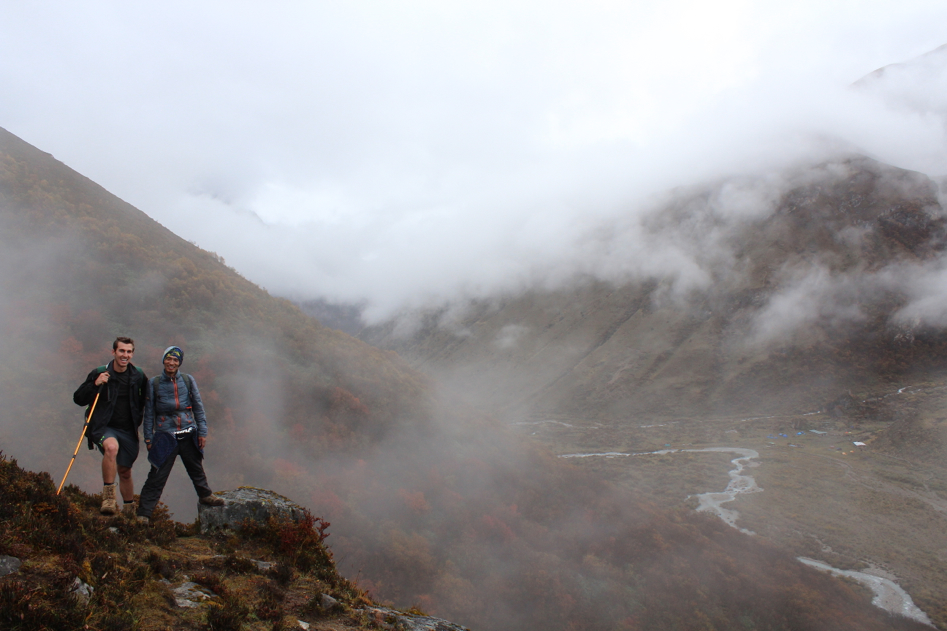 India – Epic’s most popular tour to India is our 14 day Royal Rajasthan journey from Delhi including a jungle safari into Ranthambore National Park to see tigers and elephants in the wild. We also have a 11 day Indian Wildlife Experience and a 13 day Snow Leopard expedition to search for this elusive animal. Contact us for more on these amazing Epic India journeys.

Bhutan – Epic’s popular 14 day Epic Bhutan itinerary is a journey from Paro and includes numerous hikes to take in the spectacular scenery, monastic fortresses, ancient temples and lush valleys and forests. The above image was taken by clients in Bhutan last year.

The best months to travel are September through to April. September  to November are great times for trekking and festivals in particular.

Refer to our Return to Everest Base Camp journey and stay tuned for an update from Brad on his return later in April.

South America is a “bucket list” destination and its offerings are many and varied. Presently we operate into the Galapagos, Peru and Chile with extensions offered into Argentina. As always, the key to doing what we do, is having a great team on the ground and we are fortunate to have excellent linkage in these destinations.

Patagonia is proving extremely popular. It offers a wonderful experience for those seeking a sophisticated but active wilderness adventure. There is some world class product down that way with the advent of new lodge operations like the Awasi properties and the Tierra hotels. There is scope to create all sorts of amazing experiences.

Recently some very dear Epic clients celebrated their second honeymoon in Patagonia. A highlight was helicoptering to a private lunch on a glacier in the spectacular Southern Ice Field.

The best season for Patagonia is the southern hemisphere summer – December to February. We already have trips planned for next summer including a Patagonia and Antarctica expedition for late January 2018.