Home » Blog » The Explored and the Unexplored

The Explored and the Unexplored

I recently had the pleasure of visiting both Rwanda and Uganda on a familiarisation trip. We started our trip in Rwanda, landing in Kigali in the midst of a huge thunderstorm. Luckily, by the time we were ready to disembark, the rain had slowed and the sun was making an appearance.

Exploring Kigali is a must for any traveller who is visiting Rwanda. Aside from the fact that it is an immaculately clean city with very friendly locals, there are many cultural experiences to be had. A visit to Kigali’s Genocide Memorial is an eye opener for any person. The Memorial Centre was opened on the 10th Anniversary of the Rwandan Genocide in April 2004, and is built on a site where over 250,000 people are buried. The Memorial pays tribute to the dead, but is also a celebration of how far Rwanda has come. 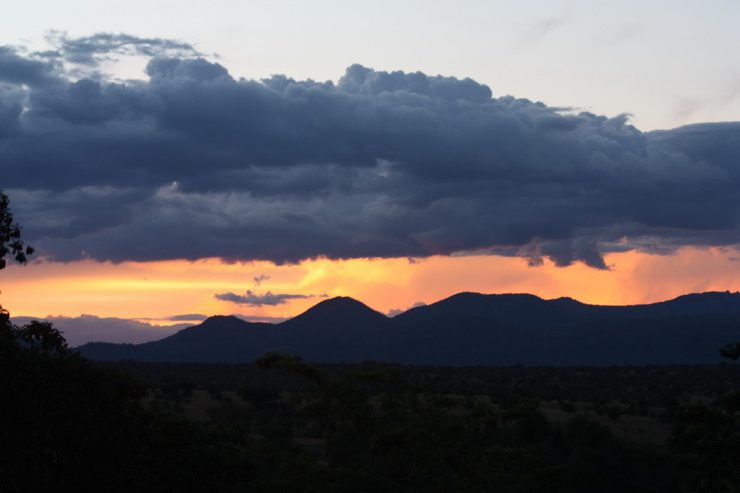 From Kigali we headed off to Volcanoes National Park. The Park is aptly named, as the views of the dormant volcanoes are breathtaking. I had the privilege of participating in a gorilla trek— a highlight on any Africa traveller’s bucketlist.  There is some degree of fitness required, as trekking through the forests is a challenge… up steep hills and then down again, dodging vines and stinging nettles. Once you reach the gorillas though, the difficult trek is all forgotten. 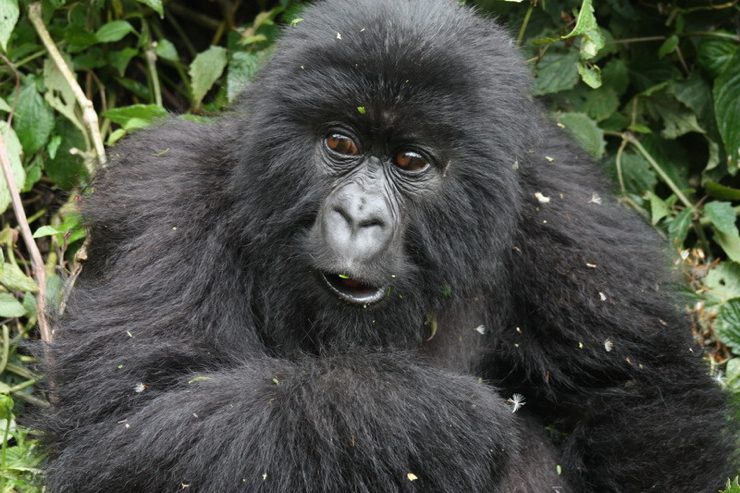 Gorillas are truly magnificent creatures. We were able to spend an hour with a family as we watched them interact and forage. A word of advice to anyone visiting the gorillas— make sure you step away from the camera and take time to sit and simply watch it all unfold, as being in these animals’ presence is truly a once in a lifetime experience! 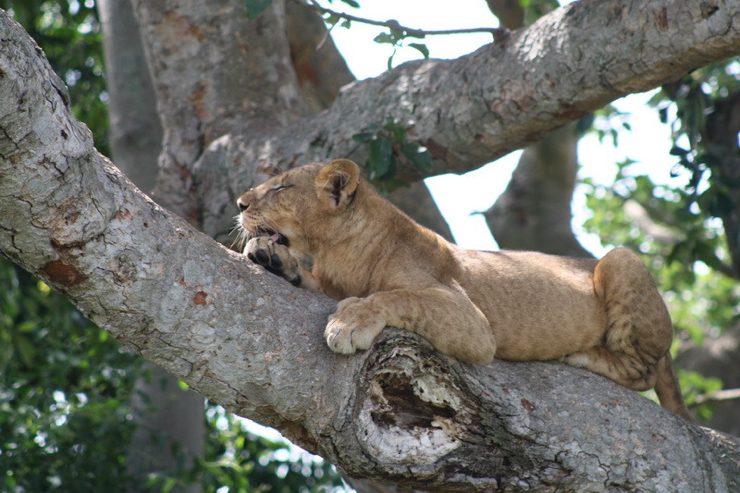 Our next stop was Uganda. Uganda is not for the first time Africa traveller, as you will not experience the Big Five. People visit this country for the scenery and different game and bird species that are only found in Uganda. With another gorilla trek under my belt with Clouds Gorilla Forest Camp, it was off on safari. From the Bwindi Impenetrable Forest I travelled through hills and valleys in the south, into the wide-open plains of Uganda’s interior to Queen Victoria National Park. The Park is famous for its climbing lion which are often found lying about in the branches of fig trees. It is very rich in wildlife with elephants, lion, hippos, buffalo, baboon, warthog, leopard, topi and kob. 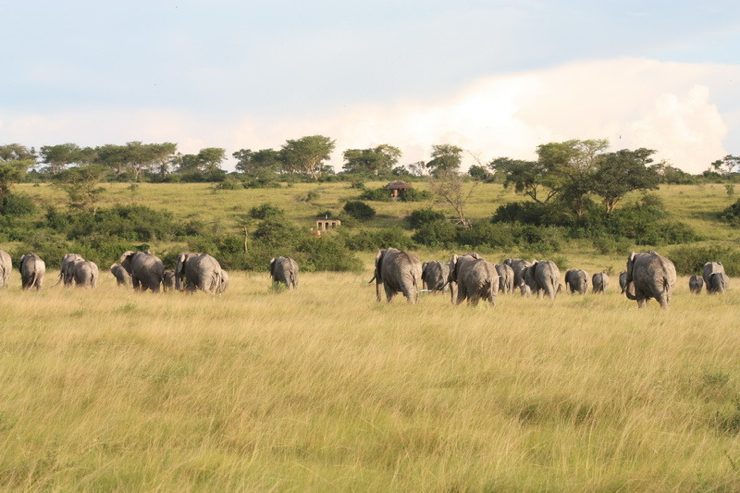 It was then onto the Semliki Wildlife Reserve to Semliki Safari Lodge, a wonderful tented camp with fabulous views over the forest. Here I had the opportunity to search for the elusive, yet magnificent, Shoebill Stork by boat on Lake Albert. The reserve is also home to a Chimpanzee Research program. If you are up for a hike into the forest, you can head out with the researchers to track the chimpanzees. 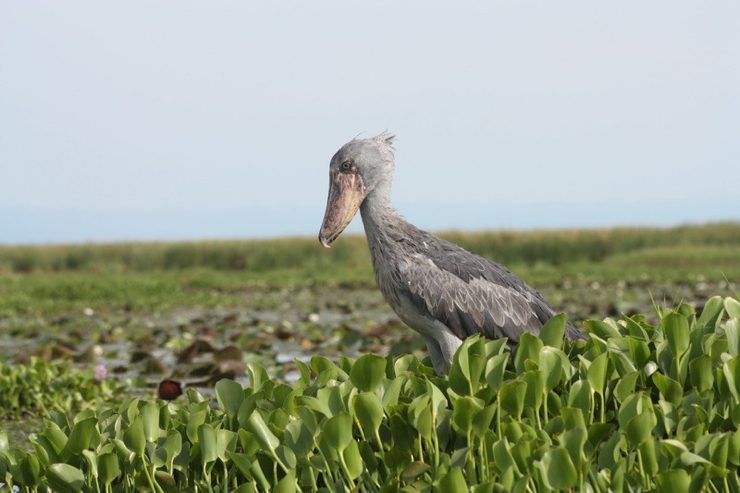 The gem of the trip was Kidepo National Park and its sole accommodation, Apoka Lodge. The scenery is absolutely beautiful and boasts incredible views of the vast golden plains and the jagged mountains in the distance. Wildlife in Kidepo is abundant. Lions, leopard, cheetah, elephant, giraffe, zebra (this is Uganda’s only park where giraffe and zebra are found together), possibly Africa’s largest herds of buffalo, hartebeest, waterbuck, bushbuck, warthog… the list is endless. 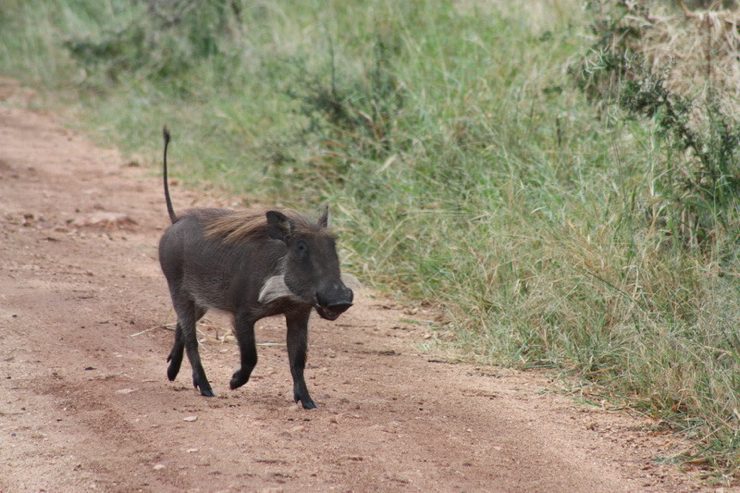 After two nights exploring Kidepo, it was back to Entebbe and onto Lake Victoria. Lake Victoria, also called Victoria Nyanza, is the largest lake in Africa and chief reservoir of the Nile, lying mainly in Tanzania and Uganda but bordering on Kenya. Among the freshwater lakes of the world it is exceeded in size only by Lake Superior in North America, its area being 26,828 square miles (69,484 square km). 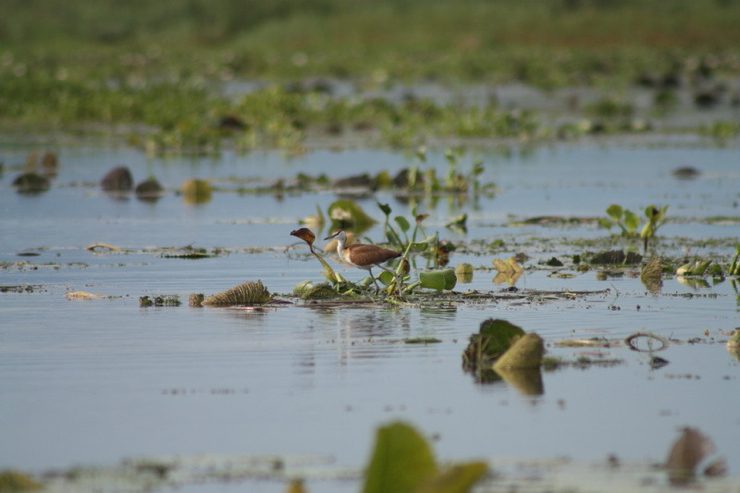 After a quick 45-minute boat ride, we arrived at Pineapple Bay. Situated on a private island in the middle of Lake Victoria, the boutique property (only 6 chalets) is perfect for a two or three night add-on; an ideal spot to unwind from your safari, or if you are keen, fish for the famous Nile Perch!