A few days on from the summit day, and it all still seems surreal…

Thankfully the photos taken by Lydia Brady, one of our AC guides, has pieced the day back together for me.

Where do I start in describing this incredible day?   It was “epic” in every respect and extremely humbling.

Climb to the summit

We left the South Col (7950m) at around 9.45pm on the 18th.  The first part of the climb is an unrelenting face to the first landmark called the Balcony at 8500m.  This took us just under 3 hours.
Enroute we had to “step on the gas” to get ahead of a number of other climbing teams who had started up earlier.  This was not an easy undertaking given we were all climbing on the one fixed line.  We would unclip our safety and grip the rope between each person we were passing.  Probably not out of the safety manual but a necessity to get ahead of the pack and into clear air.
We had managed to pass all other teams by the time we reached the Balcony.  We stopped there for a short while for a drink and continued on. 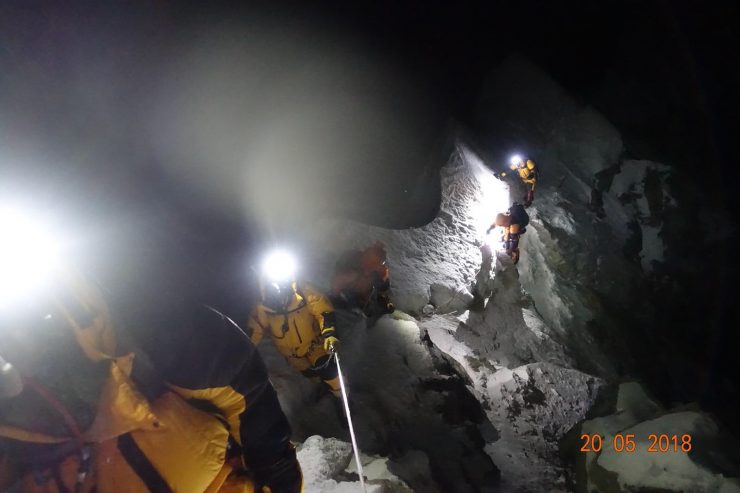 On the Cornice Traverse toward the summit. Photo: Lydia Brady

Not surprisingly it was upward, ever upward onto the south-east ridge.  It was probably a good thing we were climbing in the dark given the drop-offs on either side.  This became all too evident on the descent.
Once on the South East ridge we continued on up through some difficult rock bands before hitting the South Summit at 8750m.  From there it was onto the Cornice Traverse then the Hillary Step.  The path on this section is incredibly narrow with massive drop-offs on either side; Nepal on one side, Tibet on the other.
I think some of the pictures will give you a pretty fair idea of what I am talking about!

We finally stepped onto the summit at 4.05am.  It was an incredibly emotional moment!
I must admit to shedding a tear or two.  I had brought to the summit with me a small lace handkerchief of my late mother’s.  I guessed I would never be closer to her or my late Dad than up here so I said a hello and stashed the “hanky” on top. 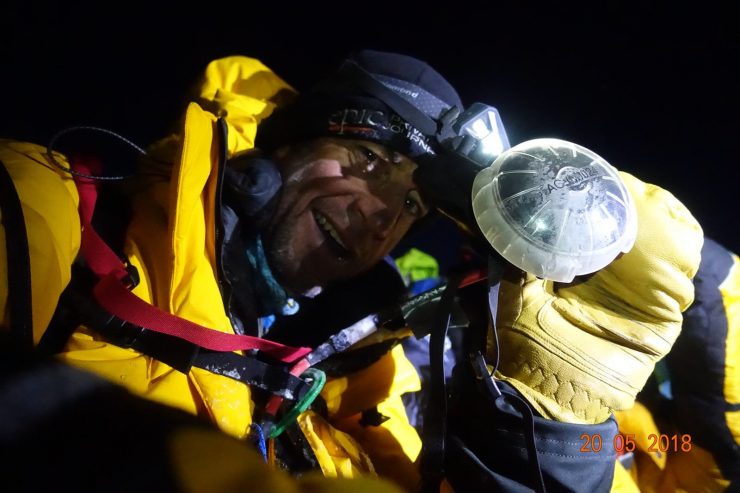 Brad on the summit, oxygen mask off. Photo: Lydia Brady. 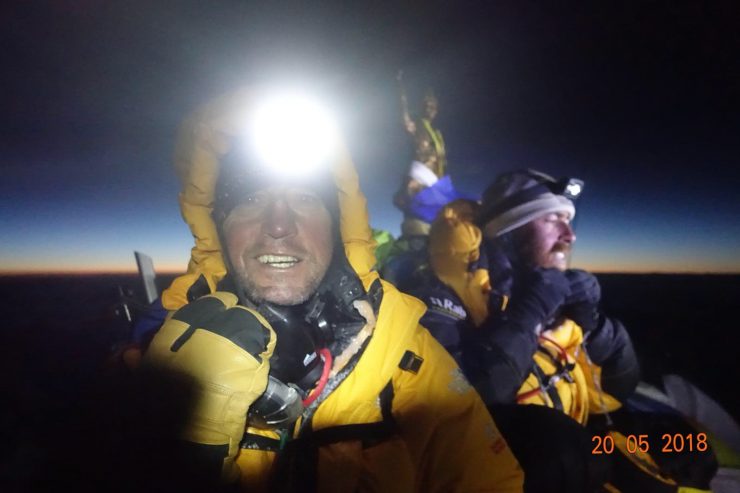 On the summit at dawn. Photo: Lydia Brady

The sun was just cresting the horizon as we summitted.
To see the new day dawn from the top of the world will stay with me forever. 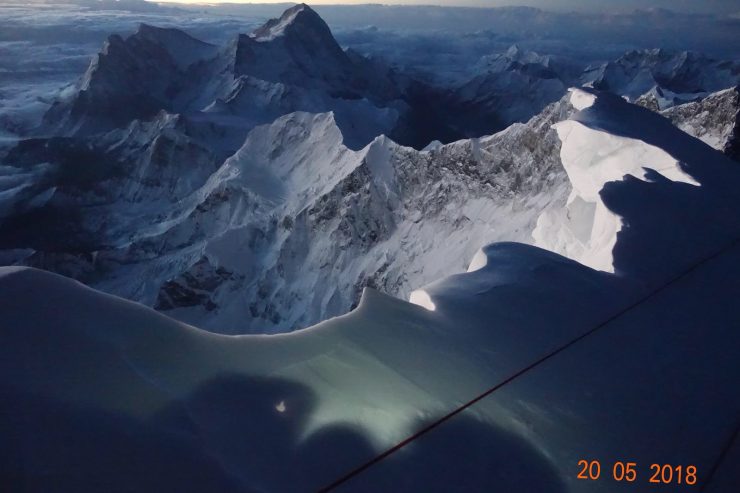 First light looking back from the Summit. Photo: Lydia Brady 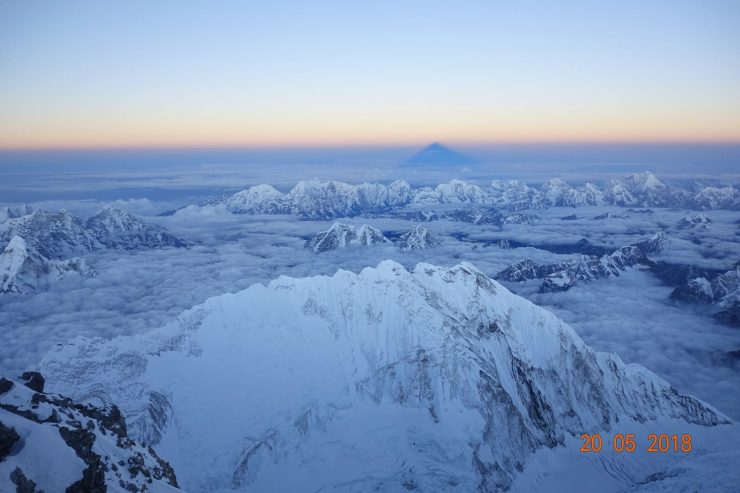 View from the summit of Everest. Photo: Lydia Brady.

The conditions on the summit weren’t ideal.  Whilst it was clear skies above, the wind was blowing a solid 35-40 knots and the temperature -25 plus windchill of at least another -10-15 degrees.

Given the conditions on the summit we didn’t spend too long there for fear of cold injuries.  After 20 minutes or so we started our descent.
The views on the way down were other worldly.  I recall looking down to Camp 2 and thinking how far down it was.  Camp 2 is at 6500m.  We were 2350 vertical metres above it.  So incredibly high. Lydia pointed out some other peaks that dominate around Base Camp such as Pumori and Ama Dablam.  They looked minuscule. 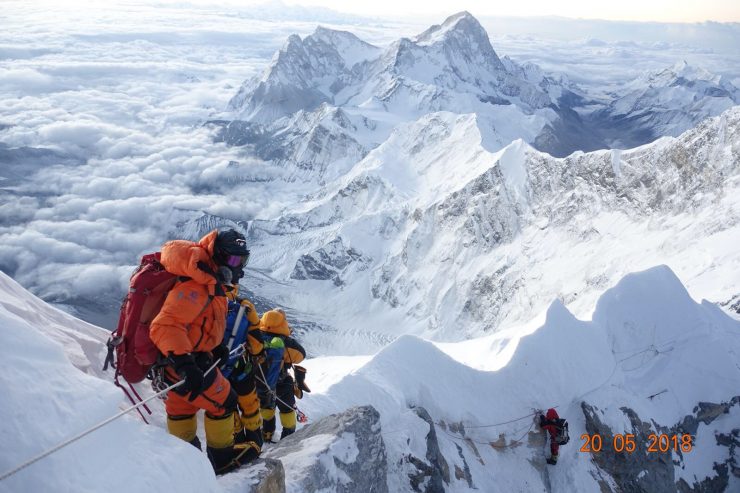 The descent from Everest. Looking out over Makalu, the fifth highest mountain in the world.

We finally descended back to Camp 4 on the South Col at around 7.30am.
We spent an extra night here, before descending to Camp 2 for another night and back to Base Camp where I am now waiting for the helicopter to come to fly back to Kathmandu. 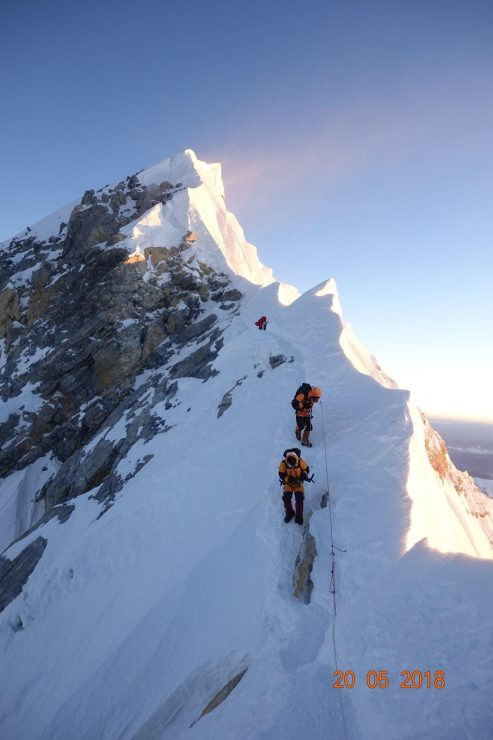 Coming down from the summit, just after the Hillary Step. Photo: Lydia Brady

The summit of Everest…and thanks.

To climb to the top of the world involves so much effort.
It is not so much the personal effort I am referring to here but rather the collective effort on the part of the climbing team.
After having spent the past 8 weeks with our Sherpa team, I am totally in awe and indebted to these guys.  Their efforts have been Herculean.
I would also be neglectful if I were not to mention our western guides, Rob Smith and Lydia Brady and our Climbing Sirdar, Rinjee Sherpa.  Their efforts in cajoling our efforts and focus have been awesome.
Thank you, thank you, thank you! 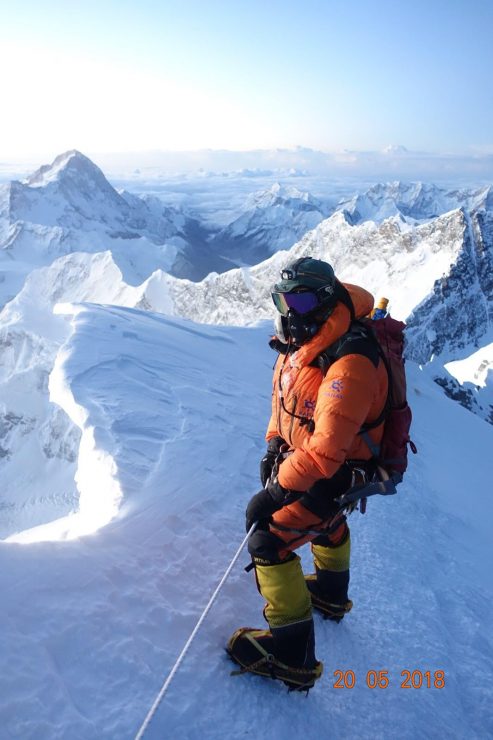 On the way down from the summit – climbing Sirdar (leader) Rinjee Sherpa. Photo: Lydia Brady

Lastly it would be remiss of me not to mention my family.  The support that my wife, Annie and my three daughters, Essie, Lilly and Ella have afforded me has been incredible.  To do something like Everest is an incredibly selfish endeavour and I am so very grateful for their support.  Thanks for allowing me this indulgence.  I love you all dearly.
Also to my sisters, Marg and Heather and their families, I want to add my thanks as I do the entire Epic team.  Thanks all so very much for bearing with me.
Going to the edge certainly makes one appreciate what you have.  Life is precious.  That said you only get one shot at it so you need to make the most of it.
I look forward to getting home and returning to a life of normality.  The Brisbane winter will be a nice change.
Once I get back I will look to share some more photos.  Thanks for following my journey.
Keep well and all the best,
Brad